Rémi Brague : “Bodily health is perverted when it is separated from the health of society.” 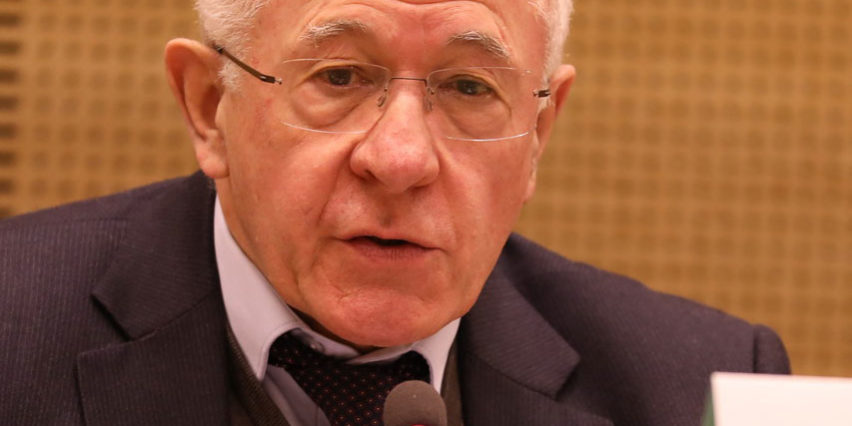 Professor Rémi Brague gives the One of Us Platform his analysis of the global health crisis, which cannot be reduced to its medical and political dimension. “Talking about “biological” has now become a way of discrediting what we are talking about by cutting it off from this moral dimension so essential to humans. In addition, there was nothing purely biological about the crisis, since contagion implies relationships between people, and consequently a society.”

ONE OF US. — How was the health crisis that hit the world with Covid-19 announced ?

Rémi Brague. — It is quite clear that it was impossible to predict this crisis with any precision, to specify the date and place of its occurrence, to predict the successive epicentres, etc. On the other hand, it could be said that the globalisation of trade, whilst it brings us many benefits, could also encourage the spread of pathogenic germs. We are already worried about what kind of viruses would be released by the melting of the Siberian permafrost, due to global warming…

How can it be that the 1969 Hong Kong flu, which killed more people than the coronavirus, or the hundreds of thousands of deaths each year from malaria do not cause any uproar ?

As I speak to you, Covid-19 may not have had its last word. For the time being, in any case, the various epidemics that history remembers, the one in Athens during the Peloponnesian War, the one under Justinian, the Black Death in the 14th century, the so-called “Spanish” Flu after the Great War, etc. have killed many more people. I do not recall the reaction to the 1969 flu clearly, if there was one…. As for malaria, it’s far away, “it’s just for the Negroes,” many people think, and so, essentially, it doesn’t matter… Only a few charities are interested in the matter.

Going beyond its purely biological dimension, isn’t this, first and foremost, a moral crisis that says something else about the evolution of our societies ?

Don’t human facts inevita-bly, and therefore always, have a moral dimension ? Talking about “biological” has now become a way of discrediting what we are talking about by cutting it off from this moral dimen-sion so essential to humans. In addition, there was noth-ing purely biological about the crisis, since contagion implies relationships be-tween people, and conse-quently a society. Whether its primary cause was either the lack of hygiene in Chi-nese markets or risky ge-netic experiments in labora-tories in the same country, in both cases it concerns the moral virtue of care – both in its banal and philosophi-cal sense – which has been neglected. It is time to re-learn that vice has very concrete consequences or, to put it in biblical terms, that “the wage of sin is death”.

What meta-political lesson can we derive from the crisis ? Confronted with the same evil, governments seemed to rediscover the virtues of the natural circles of solidarity of the human race: the family, the middlemen, the nation and its frontiers.

It is a fact that the quasi-conscious dream of the modern state (I say “the state” because it is an ab-straction that goes beyond the people who serve it) to deal solely with isolated individuals, subject to mili-tary service, taxed and for-matted by so-called “public education”, is in fact “state-controlled” rather than “na-tional”. It pulls in the same direction as the Market, whose ideal is a cloud of perfectly dusted producer-consumers. A mechanism has been at work for centu-ries, which looks to crush everything that lies between it, or at least over it. For the past few decades, it is the family that has been in the sights of these two cold monsters. They favour what are fondly referred to as “blended families”. Above all, they pass laws that al-low the recognition of so-called totally artificial fami-lies, based on the sole deci-sion of individuals and dis-connected from the physi-cal realities of reproduc-tion. These attitudes are also a ruse on the part of the State and the Market to get rid of this lump that still remains in the “liquid socie-ty”. For those who dream of a European or even global market that would obey no law but its own, the nation constitutes a delaying factor in this regard.

Some States, such as France, have opted for a strategy of emergency measures and major restrictions. The President of the Bishops of France did not hesitate to speak of the “totalitarian temptation” of benevolent States, which do not know how to trust the responsibility of their citizens. What does this crisis tell us about the relationship between the state and its citizens ?

The temptation in question is present in all countries. As for France, it has long been a special case: a highly centralized state that unified the country early on. The United Kingdom went through the same process and enjoyed a powerful monarchy as well. But France did not have a Magna Carta; it had a bloody revolution in which the urban bourgeoisie imposed its power on provinces that were either outright rebellious or “wait-and-see”. Since then, the State has been perceived ambivalently, both as the one in charge of everything and as the army encamped in an occupied country. So we ask it for everything, but at the same time we are trying to sling shot, to free ride, to evade taxes.

Should we fear a sanitary evolution of the political government of modern states ?

Indeed, it is to be feared that concern for public health may become a pretext for increasing control over citizens. I admit I am worried about what is starting to be called “Nudging“. In English, this is commonly referred to as the nice little elbow in the ribs that encourages us, without forcing us, to make the choices that some people, obviously influential people, consider to be the right ones. Hygiene is a particularly sensitive area of application of this attitude, which produces yet another soft version of totalitarianism.

What does this global crisis tell us about our relationship with death ?

Our relationship to death is paradoxical. On the one hand, our societies not only try to put it off as long as possible, which is very good, and as old as the world, but they also silently disregard it, make it as dis-creet as possible, and don’t even give it a name any-more: we talk about the “end of life” of the “depart-ed”. On the other hand, for those who do not believe in God, it is the final instance. I have had other occasions to reflect on Nietzsche’s famous phrase, “God is dead”, and to show that it turns quite logically into “God is death”: if death has even triumphed over the living God, then it is more powerful than Him, the Almighty, and therefore more divine. This diviniza-tion could explain what seems to oppose it, namely that we are not talking about death. It’s a deriva-tive of the Decalogue: “Thou shalt not take the name of the Lord thy God in vain.”

Will we return to the conventional wisdom of a sense of boundaries ?

I have nothing to say about what the future holds, be-cause I do not have this in-sight. The most we can hope for is a re-discovery of this kind. I confess that I am not really expecting it. Would an epidemic be enough to cause wide-spread movement and plough deeply into the soul ? I do not really like people talking about limit-ing our desires. By their very nature, they are infi-nite. We should work in-stead to steer them in the right direction, the only one where they can find a truly boundless field.

THE NATURE OF THE COMMON GOOD

The fight against the virus has shown our relationship to science in a particular light: by handing over the keys of the common good to the control of experts, where evidence has shown that they were not all in agreement, has politics not primarily shown the limits of science and progress ?

What is in question here is the nature of the common good. “As long as we are in good health,” says the man in the street (and we all are a little bit), nothing serious can happen to us, and at New Year’s, we wish each other “and above all, good health.” Once the supreme common good is health, it is inevitable that we must put ourselves in the hands of experts in the field. In the conclusion of one of his first and perhaps the best book, Naissance de la clinique (PUF, 1963), Michel Foucault quotes, perhaps imprecisely, a phrase by José Miguel Guardia: “Health replaces salvation.” (p.200.)
The closest match for the exact wording is: “In the end, health will triumph over salvation.” (Histoire de la médecine, d’Hippocrate à Broussais et ses successeurs, Paris, 1884, p. 440). For this positivist, it was a distant hope. For us, this is indicative of a growing trend. It is basically a mutilation. Bodily health is an excellent thing and one that needs to be promoted. But it becomes perverted when you separate it from the health of society and the people who constitute it. I would even like to return to the common understanding of the famous formula of Juvenal mens sana in corpore sano, namely: A healthy body produces good mentality, or gives good morale. On the contrary, it is when people work for their own salvation that society rests on sound principles and that we take care of each other, and thus properly care for our neighbour. To give a simple example: if we paid hospitals on a fee-for-service basis, which led to a drop in the level of care, it would be primarily because we used profitability as the ultimate criteria. It is a political decision based on a determined anthropology.

Before the health crisis, ecological awareness could appear as a moral awakening, despite its ambiguities. This awareness called for a change in lifestyles, but without really breaking with a very globalizing approach to the protection of the planet, hence a moralizing and punitive discourse, somewhat ideological, tinged with pantheism and Malthusianism. Will there be a “natural” refocus of ecological awareness ?

Once again, I’m not a psy-chic or a prophet. Once again, I can only hope. I sometimes ask whether this refocusing will not take place anyway, for the sim-ple reason that if it does not, humanity will be con-demned to disappear in the medium to long term.

Half-lies can be more dangerous than lies
4 June 2021