“The Defense of Life from the Trench of Death”

You are here:
Statement 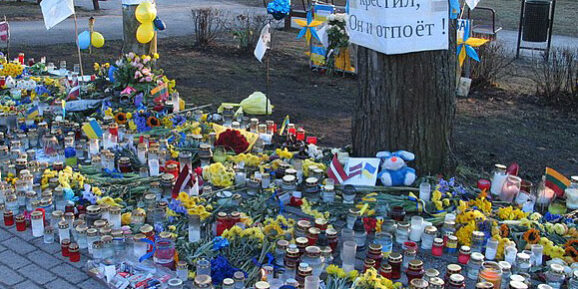 PRESS RELEASE | The European federation “One of Us” denounces the war in Ukraine and states that “Europe and Western civilization need a true moral rearmament of its principles, its fundamentals, and its values. This “rearmament” begins with the defense of the life of every human being”.

Elisabetta Pittino, a member of the One of Us Executive, points out that: “One of Us stands with the Ukrainian people, with those who go to great lengths to care for children and women, confident that every woman who wears a son brings peace. “If you want peace, defend life”, said Saint Paul VI already in 1977 on the X Day of Peace. We, the defenders of life, are ontologically for peace, that is why we always choose peace. We want to be builders of peace every time we transform a child in his mother’s womb from an “enemy” to a son, aware that war can only be transformed into peace through the acceptance of that human being as One of Us”.

Julio Tudela Cuenca, Director of the Bioethics Observatory of the UCV, member of One of Us has stated: “The culture of death unfolds all its cruelty on the weakest and most innocent. The defenders of life in Ukraine, who have fought for so long on the side of the faceless weak, the unborn exterminated by abortion, now give themselves up for the faceless weak, orphaned, wounded, lost children, along with broken families, decimated, tortured by pain. Those who are on the side of life, of all life, now give themselves body and soul for the victims of war with the same commitment as they do for the unborn, the victims of euthanasia or, simply, the discarded. Those who love life do so with a strong love, stronger than fear, stronger than death. Those of us who love life, respect for dignity and freedom fight with them. Beside each victim, each mother, each womb, each sick person, each poor person. Because our only hope is to love. Forever”.

Philippe de Saint Germain, from the Jérôme Lejeune Foundation and coordinator of the One of Us cultural platform, says “The European federation One of Us is with the suffering of the Ukrainian people, and with all the families affected by the war. It calls on the opposing forces to rediscover the sense of their unity in their common Christian roots, which they share with all the European nations. The defenders of life are always on the side of the defenders of freedom and the rights of nations. The freedom of nations is a condition of peace. The European federation One of Us supports all initiatives in favor of peace. It calls for finding solutions that respect everyone’s interests, in justice and law.

The Foro de la Familia, through its president, Ignacio García Juliá, puts its emphasis on the family stating that: “The people of Ukraine demonstrate that the family defends life both in peace and in war“.

The president of the One of Us European Federation, Jaime Mayor Oreja, appeals to “the need for the “moral rearmament” of Europe and Western civilization. The absence of principles, values ​​and foundations are signs of a weakness that has been exploited for Putin’s declaration of war in Ukraine. This “moral rearmament” must begin with the defense of each human being, the essence of the existence of the One of Us Federation and its members”.

The Spanish Federation of Pro-Life Associations, through its president, Alicia Latorre, highlights its “support for pro-lifers in Ukraine in these dramatic moments of war, fear, and desolation. War is one of the bitterest fruits of the culture of death, as it is the abortion, that everyday leaves tens of thousands of deaths in the world without almost anyone crying for them or being scandalized. It is also necessary to denounce today a terrible fight for pro-lifers in Ukraine. They not only defend life from conception to natural death, they not only defend it in situations contrary to the dignity of the person such as war, poverty, domestic and extra-family mistreatment, but they also must live with a macro business of trafficking in human beings, buying and selling babies to order, with women used as factories of human life. Sadly, Ukraine is the country that concentrates the largest number of cheap rental wombs, and it is an opportunity to denounce it and for everyone to raise their voices to put an end to this dirty and degrading business.

The One of Us Federation is today as always with the victims of war. We tirelessly defend the value of every human life, born and unborn, men and women, children, and the elderly, and we ask for respect and care for all human life, from the first moment of its existence. For all this we thank you pro-life Ukrainians and people of good will who daily show the culture of life and raise our voice and hands for the cessation of the culture of death in Ukraine and in the whole world.

European Federation One of Us : “The Matić report turns Europe into the grave of human rights”
26 June 2021

Online Seminar, Madrid February 24 : “Limitations to the freedom of expression in the XXI Century”
15 February 2021